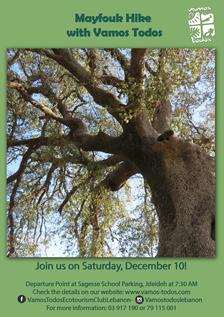 Mayfouk is a Lebanese village in Byblos (Jbeil) district, Mount Lebanon located at 60 Km from Beirut, with altitudes varying from 800m to 1100m. It was the second Maronite Patriarchal location in Lebanon. Mayfouk is known as the village of honey, where a yearly honey festival is organized every summer. You will have the chance to buy some high quality honey, our exceptional hike. Hiking in this village has a unique touch, as it is rich in historical monuments, wonderful views, and naturally diversified trails. 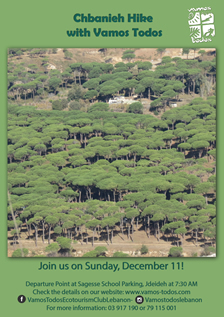 We will discover Chbanieh, a beautiful village located in the Metn Region and walk on a trail fully prepared and coordinated by Vamos Todos. This is definitely one of the most beautiful hiking locations in Lebanon, with plenty of wonderful landscapes to enjoy. Like most villages in the Lebanese mountains, Chbanieh is covered with trees and orchards. It is located amidst a beautiful vast valley, which dazzled the French poet Lamartine, so the valley became known by the name of “Lamartine Valley”. There are monuments of ancient graves in the town which are named “the graves of the Jews” until this day. Near the sarcophagus of the Jews there is a deep cave which has not been discovered yet, known as “Magharat Harb”. This cave is archeological according to the traditions of the village and it contains the forest spring which has two sources, “Kakha” and “Fouar”. 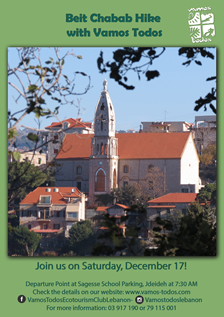 This event is a combination of hiking and cultural excursion. We are going to visit one of the biggest most beautiful villages in Metn, the typical village of Beit Chabab. The name derives from Syriac, meaning “the house of the neighbor.” This village has retained its traditional crafts of pottery and bell making into the modern age. The only bell factory in Lebanon, the craftsmen here cast the half-ton bronze bells in a single mold. The bells are usually made for Lebanon's Christian churches, who order them to a specific pitch. This traditional craft has been handed in from generation to generation in the Naffaa family. Detailed explanation of how the process is done will be generously offered to you. 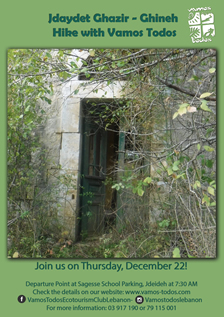 Our journey this time is in Ftouh Keserwan, one of the richest regions of Lebanon, specifically to Jdaydet Ghazir and Al Ghineh. We will start our day with some delicious Manakish in Jdaydet Ghazir and then start our hike. Jdaydet Ghazir, with Ghazir referring back to the Syriac language meaning the “disconnected place” or “the peaceful place”, is a very traditional town located at a very close distance from the sea. It includes many old houses, trails, streets, factories and monasteries that reflect a nostalgic feeling of the Lebanese ancient architecture. Al Ghineh, is a typical Lebanese village standing on the shoulders of Ftouh Keserwan and includes many historical spots as well as beautiful natural landscapes. It includes two of the most important historical spots of Keserwan area: “Adonis Rock” and “The Roman Temple” remains. 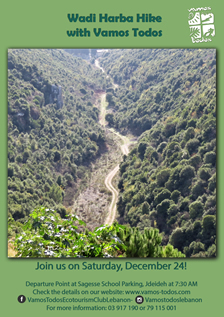 Our next hiking destination will be Wadi Harba, in Batroun. This is a newly set trail, in an area where ancient caves are being discovered. Wadi Harba is the valley separating Batroun from Jbeil. It spans from the seashore at the Madfoun bridge, all the way up to the Saint Joseph Monastery in Jrebta and the Elige hill in Kattara. The valley was part of the Wheat road that links Jbeil to Baalbek, traversing Elige – Kattara. Wadi Harba was the first habitat for Christians at the times of apostles, who crossed the old Roman road located at the sides of the valley. According to some accounts, the apostles even stopped at the location for a while. Christianity spread in the valley in the first century BC and numerous churches, sanctuaries, monasteries and hermitages were built in the location, and it was long considered a preferred destination for Christian pilgrims. Nowadays, ancient monuments and churches are being restored, to give the region back a long lost status as a pilgrimage destination. 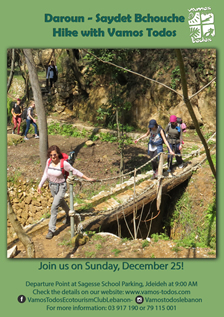 Daroun – Saydet Bchouche Hike This time, our steps will take us to Daroun., where we will discover a beautiful new trail, prepared by the Lebanese Army Airborne Regiment that we salute, namely for the important role they are playing to preserve our country’s environment. This trail will be linked to another path known as the Mar Youhanna Hrach trail, and we will complete a full loop and all walk in one level, classified as moderate to easy, Level 5. Our hike will start in Daroun and we will go to the path that leads to Aintoura. At this location, we will enjoy unforgettable and breathtaking views of oak and pine tree woods, overlooking a water stream. From that height, we will be able to admire the whole valley, all the way to the sea. 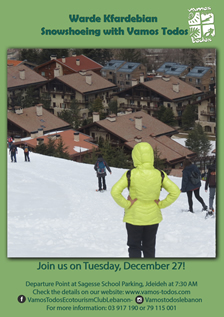 To start the winter season with beautiful sceneries, we will walk in Kfardebiane, Warde! At an altitude of 2000m and 46 km from Beirut, Ouyoun El-Siman Kfardebian offers you fresh air, clean nature, spectacular views, and great exercise. Escape from the city and treat yourself to a memorable day among nature and friends. The group will be divided into 2 levels. Those of you who prefer to contemplate nature and take photos will join the easy level, consisting of some ascents. 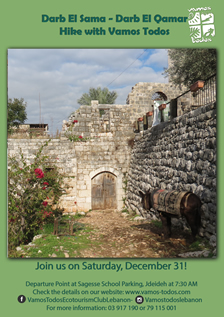 It will be an opportunity to visit Harissa before the end of the year. Join us on this day for a unique hike all the way from Sahel Alma to Harissa (Darb el Sama) then will be back from Aintoura (Darb el Qamar). This hike will be two Levels 3 & 6 uphill & downhill. However, we will go to Harissa and back following two paths: The first trail, known as “Darb el Sama”, is quite steep but not very long. We will start walking from Sahel Alma, and reach Harissa through Ghadir. There will be a steep 500 meters uphill and the walk will last around 4 hours 12 km, with spectacular views along the way. Then after the visit in Harissa, we will take the second trail. Level 3 will start the hike from there. This trail is known as Darb el Qamar”. It is quite suitable for those who would like to join the hike following an easy trail. The group will walk 7 km all the way to Aintoura, with a downhill of 300 meters 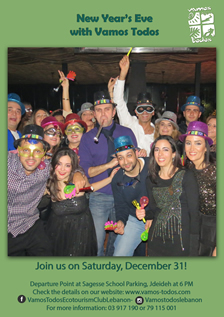 NEW YEAR’S EVE! It’s back and we just can’t wait to share the BLAST! It is unbelievable how time flies!